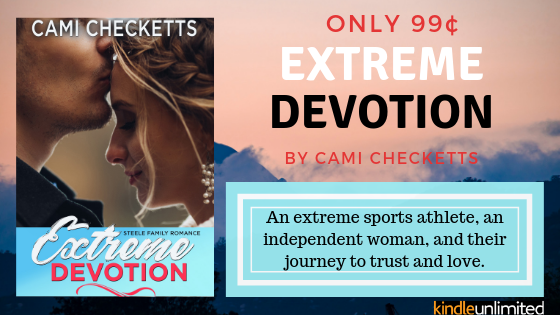 Happy long weekend! I had to do a sale to say goodbye to summer. I hope you love this intense and fast-paced book. I loved Jex and Pearl's story so much! It will be $.99 until Labor Day and is also free for KU readers. Do a lot of you use KU? I really like it as I can borrow up to ten books and always have something fun to read. It's great for authors also as we get paid for each page that is read.  Hugs and happy reading, Cami 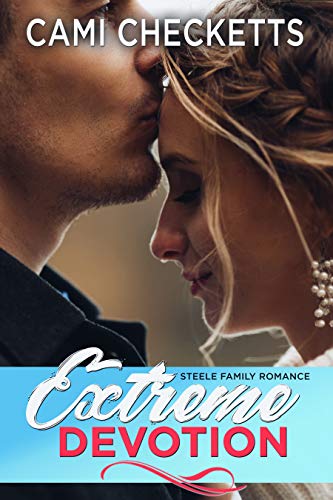 An extreme sports athlete desperately in love; an independent woman afraid to trust. Can they both let go of their fears and embrace their future?  Jex Steele lives for his insane stunts and his flirtations with Pearl Jacobsen-Davenport. He prays for the day the independent Pearl will change her last name to one syllable—Steele. When his world upends can Jex conquer his own demons or will he lose everything, including the woman he loves? Pearl Jacobsen-Davenport manages Jex Steele’s career, even though every life-threatening stunt terrifies her. He’s her best friend and the only man she’s ever loved, but can she move past her fears and trust that he won’t kill himself on his next stunt?  Can the Steele siblings help Jex learn what matters most in life before it’s too late?

Jex pedaled up to Pearl. The cameras were rolling, and it was time to tease and flirt with her. The crowds loved their interactions as much as they loved his stunts. He couldn’t blame people for loving any view they could get of Pearl, but he didn’t flirt with her for better ratings. He flirted with her because he’d fallen in love with her over the past six years of working together, and he kept praying that someday, somehow, she’d move past friends and co-workers and fall for him. Every other woman seemed to fall for him. Why not Pearl?

“I love you, Jex!” a woman yelled from the crowd.

“Marry me, Jex!” someone else yelled. Then there were so many shouts that he couldn’t even try to distinguish them.

He waved, but his smile was only for Pearl. She was tall, almost five-ten, and she always wore heels. He still had her by several inches at six-three. He adored her for wearing heels, even though he teased her about it too, especially when they were in some primitive spot where her heels were sinking into the mud. Then he’d get the opportunity to pick her up and carry her. He teased her mercilessly on those days, but he would never complain about any chance to touch her.

As he approached her, he saw that she was dressed impeccably, as always. Today she wore a blousy polka-dot black-and-white shirt with a red pencil skirt. Whew. He had to pray hard to keep his focus on her gorgeous face. Her highlighted brown-and-gold hair was twisted in a funky updo, and her unique teal-colored eyes lit up as she said, “Hey, boss.”

Her cheeks turned pink. Man, he loved her. The shouts of brazen women in the crowd now begging to have his baby were drowned out as he drank in Pearl’s sweet smile.

He climbed off the bike, propped it against a nearby fence, and eased closer to her. The crowd finally quieted in anticipation as his mic picked up his and Pearl’s exchange.

She arched her eyebrows, pretending he hadn’t asked the same questions before each stunt for almost a year now. “The day?”

“The day you agree to change your last name to Steele? One syllable has to be an appetizing offer.” He hoped he was an appetizing offer, not just that she’d go from Pearl Davenport-Jacobsen to Pearl Steele and save hand cramps when she wrote thank-you cards.

She smiled, and he awaited her answer. His questions rarely changed, but her answers varied day to day. Sadly, none of them had been anywhere close to an acceptance … yet.

“I might consider it …” Her teal eyes sparkled at him.

His eyebrows were the ones shooting up now, and his pulse started racing. She’d never “considered” before, usually just shot him down with a cute little grin. “If?” He licked his lips and stepped in closer. The crowd was so quiet he could hear his shoe scuff the asphalt. Everyone loved their interludes—part of the experience, he supposed—and since he had a mic on, everybody could hear it. He didn’t care about fans, his producers, or money right now; all that mattered was Pearl and her response.

“If you take me to JoJo’s for shaved ice tonight, it might be a start to warming me up to the idea.”

His stomach lifted and his blood ran so hot he felt like he was on fire. He could fling himself off a two-thousand-foot cliff in a wingsuit and not experience the adrenaline rush and excitement of this moment.

He tried to play it cool, but that was an almost impossible order. His dream woman was maybe agreeing to marry him. “I could arrange that,” he said in what he hoped was a smooth, calm, confident voice.

She grinned and ducked her head slightly in the sweetest, most attractive gesture ever made by womankind. It was her signature move, and he loved it almost as much as he loved how such a professional, with-it woman could also be innocent and fun and absolutely perfect for him.

“Does that mean …” The answer to his other question, which she always responded to in the negative, might just change today. Forget riding a bike on the ledge of a two-thousand-foot drop-off on each side. If she’d say yes to his other standard question, he was going to focus on kissing the beautiful Pearl Jacobsen-Davenport. This could be the most important moment of his life. The stunt could wait all day, for all he cared.

She met his gaze, her teal eyes gleaming. He often thought it was a gleam of desire, but then she’d reject him, and he’d be left wondering if she was simply playing for the crowd or if she just liked to toy with him. She was an angel … with a teasing side that kept him coming back every day, begging like a dog with his tongue hanging out.

“Mean what?” She tilted her head, and the desire in her eyes morphed to a challenge.

Jex chuckled easily, but his insides were churning and he felt like his future was riding on this question. He stepped even closer, cupped her smooth cheek with his palm, and said, “Will you give me a kiss for good luck?” He held his breath as he awaited her answer. How many days had they repeated this pattern, and how many days had he tasted disappointment instead of her sweet lips? He didn’t waste time calculating, but it was around a year ago that he’d grown brave enough to ask her these questions every day.

Pearl’s gaze dropped to his lips, then returned to meet his eyes. His heart leapt and his pulse was racing as she leaned closer to him. His other hand went naturally around her trim waist. She placed both of her palms on his chest, and he caught his breath. This was happening. Him and Pearl. Forget the stunt. If she’d kiss him, agree to marry him, he’d sweep her off her feet and find a preacher somewhere on this beautiful island, and they’d be married on the beach at sunset. Every muscle tightened as he waited for her to say yes to his question—or even better, answer by kissing him. How he’d dreamt of kissing her.

Her pulse was pounding so fast, he could see it thrumming in her neck. He ran his fingers down to that pulse point and brushed it. She let out a soft gasp that made his own pulse speed up. The smooth skin of her neck was so appealing. He wanted to kiss it, after he kissed her lips.

She arched up, sliding her hands around his neck, but instead of going in for the kiss, she darted her lips around to his ear and said, “Not today. Ask again tomorrow.”