Do Trust Your Special Ops Bodyguard

It's here! I love this book so much. It has it all for me: romance, humor, adventure, and danger. The heroine was adorable and the hero so tough and irresistible. I hope you love it too! Hugs, Cami 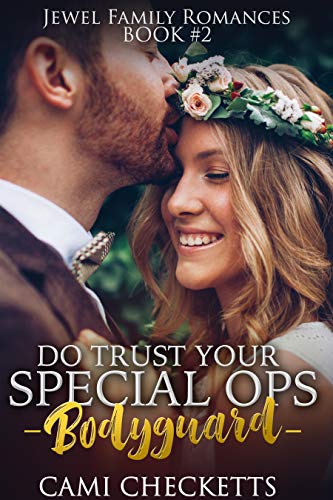 A brilliant chemist running from her vicious ex; an Air Force security specialist who will protect her at all costs. When he’s hired as her security detail, can she trust him to keep her safe, or will she find herself falling in love with him? Cosette Peterson is flighty, happy, and may have earned the title of "Loony Lovegood" from the Jewel brothers as a teenager. When she witnesses her fiance torturing a man she has to run for the safety of Isaac Jewel's arms. Who knew those arms would be so appealing, better than even her teenage fantasies? Will the man she's had a crush on for over a dozen years be able to protect her, or will he break her heart?

Isaac walked over to her and leaned in close. “How do I smell?”

Cosette shut her eyes and breathed him in. “Delectable,” she said, before she could stop herself. Her eyes flickered open.

Isaac was leaning closer to her. He slowly, tantalizingly brushed her hair over her shoulder, his fingers doing a number on her sensitive skin. He bent down and sniffed her neck, then slowly exhaled against her throat. “Delectable,” he murmured.

Cosette laughed uneasily to hide the thrill she felt as his warm breath rushed over her skin. “My Imaginative Woman line. A sweet and feminine fragrance gives each woman a sunny outlook, with iris, jasmine, and orange blossom at its heart, juicy pear and blackcurrant at the top, and patchouli at the base. An unashamedly girly perfume for day or evening wear.”

Isaac chuckled. “Yes, you should definitely do commercials.”

“I’m a fan,” he said, leaning closer still. “It mixes perfectly with your body chemistry.”

Her stomach whooshed as if she were on a roller coaster. “Th-thank you,” she murmured.

Isaac watched her with eyes full of longing. Cosette had never felt so desirable, even with the man she’d thought was going to be her husband. She recognized now that Vance was all wrong, but she still shouldn’t be so taken with Isaac so quickly.

She pulled away and strode around him. “Yours is not quite there, though. Let’s try the one I think will be our winner.”

Isaac lifted his eyebrows at her, as if challenging her for daring to walk away from him. Wowzers. The powerful military man was irresistible.

She ignored the look and gestured to the chair. He slowly walked in her direction, his gaze never leaving hers. What did he want? A kiss? She put a hand to her throat and knew that her limited experience with men had failed to prepare her for the likes of Isaac Jewel. Could anything have prepared her to be alone in a tropical paradise with a man so … manly? She realized now her little perfume game was playing with fire. She shouldn’t have suggested it. She should stop now.

Isaac sat. She automatically cleaned off his neck and heard herself saying, “And finally, I think this will be the winner: my Military Man line.” She didn’t tell him that she’d had him in the back of her mind as she created this one. “This cologne is a combination of deep basil, warm spice, and brushed suede. It defines casual elegance and strength while exhilarating the senses with a blast of fresh air for the man who was meant to protect and serve.” She gulped as she finished and Isaac gave her a heated look.

Isaac leaned closer in his chair, tilting his chin up so she had full access to his neck. She gulped and put some cologne on her finger. Slowly, she raised her shaky finger to his neck and dragged it across. He swallowed as she did, and for some reason, his neck moving under her fingertip filled her stomach with a flash of heat. Her hand moved to the other side of his neck, and her finger lingered on his pulse, which sped up.

Cosette pulled back, and their gazes locked. She couldn’t have moved if a bulldozer was coming at her.

“So you think this is the one?” Isaac asked quietly.

She thought he was the one. “Um, we’ll have to give it a minute for the alcohol to evaporate and mix with your body chemistry.”

He nodded. “Anything I can do to speed the process?”

“Warm air helps. I could blow on it.” Her eyes widened as she realized what she’d said. Oh no!

“Yes, please.” He gave her a smoldering look that she felt clear through.

She should not do it. She should not lean in and blow on his neck. Instead of heeding her brain’s promptings, she leaned in so close she brushed against his chest. Feeling unstable, she braced herself, grabbing on to his far-too-perfect muscular arms.

She glanced up at him. He was breathing more quickly, and his blue eyes were concentrated on her. What was she supposed to do? It took half a beat of staring at him before his delicious scent invaded her brain and she sighed. Blow on his neck. That sounded … appetizing.

She felt like she was floating as she leaned against his broad chest, clung to his arms, and exhaled on his neck. His body shuddered against her. Was he feeling what she felt? Hot, breathless, full of anticipation? Was there anything wrong with moving just a bit closer and pressing her lips to his neck? She couldn’t think of anything, so she did.

Isaac let out a soft groan as her lips connected with the warm skin of his neck. She heard herself groan as well. She wanted to trail her lips up his neck to his face and see what kind of a reaction kissing him full on the mouth would do to the both of them. Inhaling deeply, she said against his neck, “It’s perfect. You’re absolutely irresistible.”

“To you?” he asked in a husky whisper.