Yes for Austin's story finally being here! I really appreciate all of you who asked me to write it. I was worried about skipping 10-15 years in the future but I just decided to set it as if it were present day and this book was so much fun to write. Austin is so hilarious but he goes through some hard stuff in the book, and Kate is the perfect fit for him to fall hard enough to give up all his other girlfriends ;). I think I've told all of you that I patterned Austin after my youngest son, and stole most of Austin's expressions from Phoenix. The other night Phoenix told us that he'd met "the one" and he was giving up all his other girlfriends. Oh my we laughed! Especially me as I'd recently written that into Austin's story. I'll paste in a picture of my fun little boy, Phoenix. He claims he doesn't know how to smile hence the goofy look ;).

I hope you love the book! Hugs, Cami Find Don't Abandon the Superstar on Amazon. 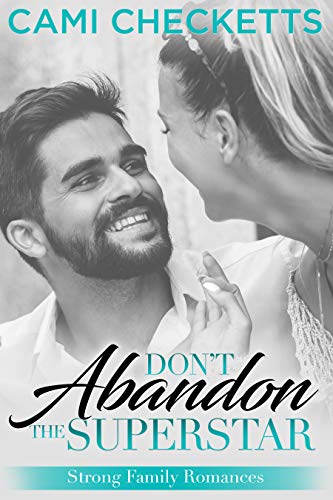 A hockey superstar who’s charmed his way through life; a woman who’s never had anything go right, desperate to free her wrongly accused mother. When their mixed luck crosses paths, life will never be the same.

Kate didn’t have time to worry about the “hottest guy on campus,” and Austin Strong appeared to have plenty of other women to keep him occupied. Why that made her so upset was beyond her. “Wait!” They heard a loud yell from behind them, followed by the pounding of heavy footsteps. “Wait! My beautiful angel, please wait!” Kate and Jenny spun around to see who the guy was yelling at. When Kate recognized the incredible dark-eyed guy who’d run into the wall, her shoes seemed to freeze to the icy sidewalk. Or maybe that was just a result of vicious winter temps in Amherst, Massachusetts. “Did he just call you his beautiful angel?” Jenny whispered. Kate’s heart lurched. She was pretty sure he had. It probably meant nothing. She imagined that he’d said the same line to hundreds of women. A huge smile covered his face as he raced up to them, stopping just short of plowing Kate over. He didn’t even appear out of breath from his sprint across campus, but that made sense if he was really some hockey superstar. His eyes slowly traveled over her, and Kate felt warm from head to toe. His smile softened to a charming grin, and he gave her a smoldering look that made her feel a little weak. “Oh my,” Jenny muttered. “He’s not even looking at me, but I think I’ve died and gone to heaven.” Austin gave her roommate a brief smile before focusing back on Kate. “I found you,” he murmured, stepping in closer and softly touching her cheek. His touch sent warmth searing through her like a flash of electricity. Kate thought he was incredible, irresistible, but she wasn’t some flighty girl who fell for the superstar. Her life was much too focused to allow for a distraction like Austin Strong. It took an unreal act of self-control, but she stepped back. His hand dropped to his side, and Jenny cursed loudly. “Please,” he said, leaning in but not touching her again. “Please say you felt the connection when our eyes met?” He smiled briefly. “I felt it so strongly, I ran into a wall.” He felt the connection? Irrational happiness bubbled inside of her. She hadn’t felt so giddy since she was eight and thought she was getting a pony for Christmas. Now she recognized that it was an irrational dream, but when she’d gotten a stuffed pony instead, her young heart had broken. That’s all Austin Strong was. He looked like a thoroughbred stallion, but he was really a stuffed pony. Not the real thing. Not that she was looking for any kind of pony or stallion. He leaned in so close, she could smell a heady mix of manly, expensive cologne. His sheer size, presence, charm, and smell was messing with her head. “Please say you felt it,” he repeated. “I felt it,” she heard herself say, all breathless and sappy. She blinked and sucked in a breath. That was nothing she should be admitting to. Even if this perfect specimen thought they had a connection, he’d be moving on to the next hundred girls in line before she could read another case study. A charming smile lit up his face, and the world around them faded away. He reached out both hands to her, and she placed her palms against his. Warmth and happiness radiated through her at the simple touch. If he kissed her, she might explode with joy.