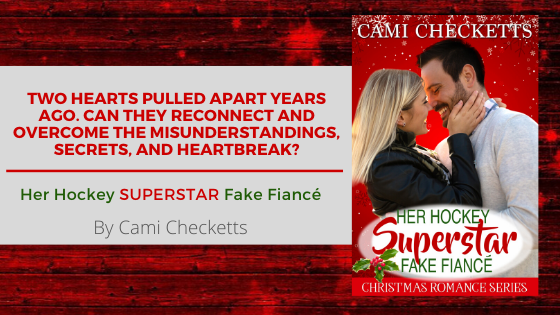 My family and I have fallen in love with our local university's hockey team. My boys get upset if they miss a game. USU's team is intense and impressive and they don't hesitate to fight. With watching so much hockey I had to write another book with a hockey player in it. I hope you love this new fake fiance book as much as I do. Here's a picture of my husband and I at last night's hockey game. 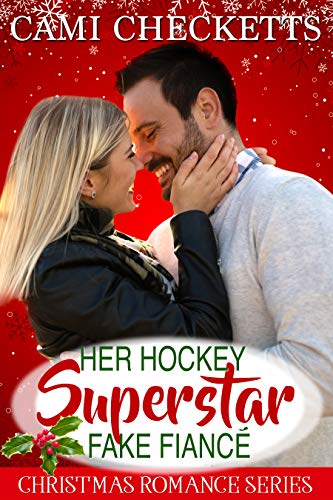 Two hearts pulled apart years ago. Can they reconnect and overcome the misunderstandings, secrets, and heartbreak?Buy Now

Faith studiously avoided looking at Jag, but she could sense him approaching, as if they’d never been apart and she was still as attuned to him as ever. Then he was standing by her side, attracting stares from some of the kids who were taking breaks or were out of the water. She heard Tyler, one of the older boys, breathe, “That’s Jag Parros. Holy crap!”

“Tyler.” Faith’s voice was more of a bark than she’d ever heard it. “Get moving.”

“Yeah, Coach.” Tyler cast one more look at Jag, then dove under and started across the pool, doing freestyle.

Faith didn’t look at Jag. She didn’t know if she was strong enough to look at him and not throw herself into his arms again. Without a coat on like earlier to block some of the sensation, she’d be in major trouble. He eased in closer to her, and his musky smell mingled with the strong chlorine scent from the pool. She’d been raised in the water and was addicted to Jag’s scent, so she found herself leaning toward him also.

He leaned so close his mouth tickled her ear and sent darts of desire through her. “That’s Faith Summers. Holy crap,” he murmured.

Faith laughed. She couldn’t help it. She loved him teasing her and loved that he still called her by her maiden name. When Jag’s deep chuckle joined hers, she let herself look at him. He grinned down at her, that easygoing grin that she’d thought was the highest reward any woman could ever hope for in life. He was tough on the ice, but he’d always been funny and soft for her.

“You look amazing, Faith,” he said, brushing some hair away from her face and making her jaw tingle from his soft touch.

“You look amazing-er,” she admitted.

His grin just kept getting bigger. He lowered his voice and said, “We need to talk.”

All the tingly good feelings disappeared. She focused back on her team and called out some commands and instructions. The last thing she wanted to do was “talk” with him. He was the one who’d written her that letter dismissing her and their relationship. The letter hadn’t been harsh, just truthful: he was going places and couldn’t tug her along. It had still ripped her apart. She’d loved him with all her seventeen-year-old heart. She’d never recovered.

Eight years later, she’d finally let Blaine talk her into getting married. He’d been very kind to her and very patient, but she’d never fallen deeply in love with him like she’d hoped she would. Then, a year later, Blaine had died of a brain tumor. One day he was healthy, and the next day he had intense headaches and was rushed into the emergency room and diagnosed. Three weeks later, he was gone. Tomorrow was the one-year anniversary of his death. He’d written a letter the day he was diagnosed with the brain tumor and asked her to read it at the cemetery on his one-year death day. It had been sitting on her dresser, taunting her, for a year. She was curious but a little leery of what it would say. Did he know she’d never loved him like she did Jag?

Anguish and guilt rushed through her. She’d married Blaine knowing she still loved Jag. She’d wasted her life and her marriage, unable to get over the man standing next to her. Now he had the gall to show up after leaving her for almost ten years and want to talk? No way.

“I’ve got nothing to say to you,” she muttered. “Go, go, go!” She raised her voice to yell at Nancy. “Great job!” she called as Nancy finished the sprint lap.

“Well, I’ve got enough to say for the both of us.”

She glanced up at him. It was a mistake. He was so stinking appealing. She wanted to either throw her arms around his neck and kiss him, or shove him into the pool.

“I need your help.” His voice was urgent. “There’s this reporter that’s after me.”

“The lady in the tight suit?” she asked, arching an eyebrow. So he’d only come after Faith for some help? That stung. Was that lady the kind of women he dated? “Enjoy it.” She forced a fake smile.

“No. Honestly. There’s nothing enjoyable about this. I need to stay far away from her, and I need to look good for the media.” He lowered his voice and said, “So I lied and told her you and I were engaged.”

“You what?” Faith yelped.

The pool fell silent, except for the splashing of those swimming who didn’t hear their coach’s outburst.

“Sorry,” Faith said somewhat calmly to her team. “Sorry. You’re all looking great. Keep … swimming.” She turned back to Jag. “Why would you say that?” she hissed through her teeth.

He smiled easily. “Because I’ve always wished it was true.”

“Excuse me?” Her heart was thumping out of control. Emotions warred within her: anger that he would dare say something like that, and an out-of-place desire since she also had always wished it could be true. She’d wanted him for so long, and now he had the guts to show up and try to use her to look good for the media. Before he had a chance to say more that would either anger her or make her want him, she shook her head. “No way. I’m not pretending to be engaged to you.”

“Please, Faith. I need your help, and you owe me.”

“I owe you?” Her voice was pitching up again. “How dare you?”

He splayed his hands, looking for all the world as if she had misused him. “I’d think after breaking my heart ten years ago, you’d want to make it up to me.”

“I broke your heart?” Each word was louder than the last. Faith couldn’t stop herself: she shoved him into the water.

Jag yelped in surprise, flailing his arms and trying to grasp for something, but he only reached for air. He hit the water with a loud splash.

The members of her team were either staring at her in shock, laughing, or talking rapidly to each other. Nobody was swimming. Jag surfaced, his expression vacillating between shock and amusement. He looked even more incredible with his dark hair dripping water into his face and his clothes now plastered to his muscular body.

“Practice is over!” Faith yelled. “See you after the break.” She turned and speed-walked toward the entry. They had a two-week moratorium starting tomorrow. Maybe it would be long enough for the kids to forget how their coach was acting right now. She doubted it.

Faith ignored him and broke into a run, grabbing her purse and coat from the bench and ignoring all the chattering of her team behind her.

She figured she’d made her point with Jag. No reason to stand around and discuss it further. She scrambled through the icy parking lot and into her car, started the engine, and peeled out of there. As she glanced at the rearview, she saw Jag sprinting out of the front doors. His clothes were dripping, and she could see he was yelling for her to stop. Faith laughed at the famous, ultra-handsome man standing there soaking wet. Her laughter faded quickly. Maybe she’d won this round, but Jag wasn’t one to quit easily. The only thing he’d ever quit was their relationship.