New Release! How to Switch a Groom 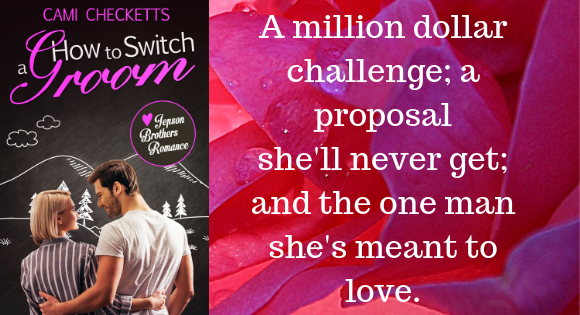 Yay for today! I have been waiting to share this new book with you and hope you love it as much as I do. The first book in this series, How to Design Love, was published a couple of years ago. I think most of you have read it, but if you missed it, find it free here. It was Colt and Brikelle's story where she was terrified of dogs and he has a huge Great Dane and they're forced to fake a marriage.  How to Switch a Groom is book 2 (With Cally and Tate - Colt's first love and brother) and I had so much fun writing it. Book 3, How to Lose a Fiance will be out next week. Hugs and thanks for all the support, Cami 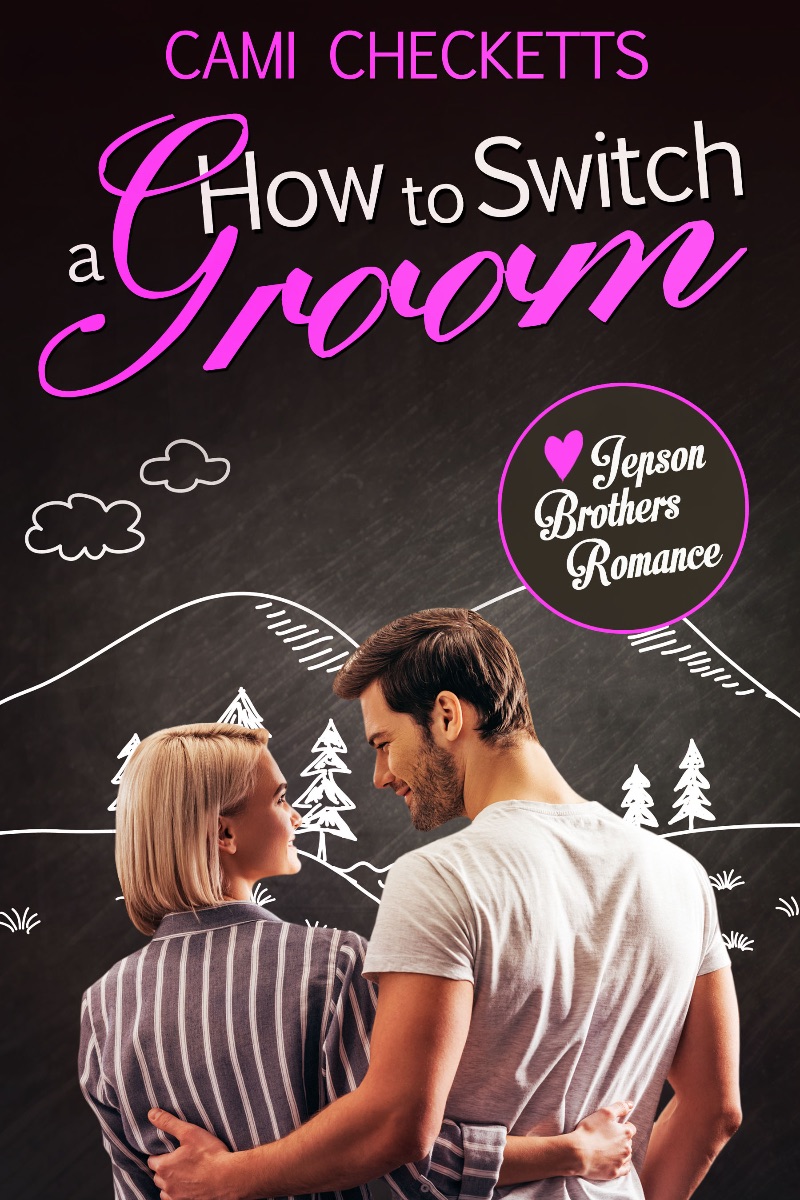 A million-dollar challenge; a proposal she’ll never get; and the only man she’s meant to love.

Cally Young returns to her small hometown after five years and is given an insane challenge—a million dollars for her charity if she gets a marriage proposal out of Tate Jepson. Tate has grown into the most incredible and appealing man she’s ever met, but she knows the proposal will never happen. Tate despises her because she broke his older brother’s heart and ditched all of the Jepson brothers for her career. There’s nothing she can do to make it right and Tate doesn’t hesitate to let her know that.

Tate Jepson has loved Cally Young as long as he can remember. There is just one problem—Cally was always destined to marry his older brother. When Cally ditches all of them and breaks Colt’s heart Tate tries to convince himself he hates her, but she may be too irresistible for him to resist.

When Cally is kidnapped for a hefty ransom, Tate realizes what’s important and prays he can somehow rescue the only woman he’s ever loved.

Excerpt: How to Switch a Groom

“What are you doing here?” A deep voice came from her right. Cally squinted against the evening sunlight haloing the man’s dark reddish brown hair and focused on the face of Tate Jepson. Colt’s brother, and definitely not a Cally fan, at least not anymore.

Tate had been a beautiful child, a handsome teenager, and a near perfect young adult, but to see him as a man made her stomach drop and her heart race, as if she’d just been thrown off a cliff. His chestnut hair was thick, framing his model-handsome face perfectly. His startling blue eyes were shadowed by thick, dark lashes and dark brows that she’d think were waxed if she didn’t know Tate so well. He was perfectly beautiful but too tough to be a pretty boy. “Pretty boy” had been a common taunt from his brothers, for which he’d always gotten into a brawl.

Five years had passed since she’d seen Tate. The years had been more than kind to him, whereas she felt like she’d just gotten beaten up inside and out as she’d clawed her way to the top of the design world. She’d often heard about how gorgeous and thin she was, but all she saw in the mirror were sharp lines and hollowed-out hardness.

What are you doing here? Tate’s question hit her right in the gut. What was she doing here indeed? At this point she wished she could slink away and not have anyone know she’d braved an appearance at her ex’s engagement party.

“I was invited by the future bride,” she said, hoping to tease a smile out of him as she gave him the sparkling smile to which he used to always respond. Tate had been one of her best friends and always done anything she asked. If only they could go back to those carefree days of friendship. “And you?”

“On the groom’s side.” His returning smile was grim as he brushed his hand through his luscious locks. Cally knew it was an unconscious gesture that he repeated often. What she wouldn’t give to touch his hair. The brush of his hair also showed off how well his suit fit him. The dark blue suit molded breathtakingly to his toned, tall body. She would love to see if that shoulder was as broad and firm as it looked through the fabric.

Oh, my, goodness! What was she thinking? This was her childhood buddy and Colt’s brother. She couldn’t be running her hands through his hair or touching his shoulder. Obviously, she wasn’t as hurt over Colt moving on as she’d imagined if she was blatantly checking out his brother. Tate was a generous, fun and smart man who had been like a brother to her as well. What was wrong with her?

She took a sip of her lemonade to ease the dryness in her throat.

Cally nodded tightly. She’d been as shocked as Tate was now acting when Brikelle stopped by the design shop Cally recently started working at in downtown Ogden to invite her to the engagement party. Brikelle had handed her invitations to the engagement party and the wedding, expressing her hope that they could be friends. She was adorable and sweet. Cally found herself liking the girl despite the jealousy she felt.

Brikelle had not only taken Cally’s man but also the exclusive interior design jobs Cally’s Uncle Joshua had promised her if she relocated. Cally had almost packed up and flown back to Chicago when Colt explained to her that he’d fallen in love with Brikelle. Yet coming home had made her question if she wanted that fast-paced life anymore. She’d missed Eden, especially the deep friendships she’d known with the Jepson brothers. She’d secured a job with a design company in Ogden, but she wasn’t sure which direction she should take her life, and starting her charity seemed as far away as ever.

“My future sister-in-law is a saint,” Tate muttered.

Cally glared up at him. “Excuse me?”

Tate arched an eyebrow. “You heard me. That Bri can be compassionate to the likes of you.” He whistled and shook his head. “She’s on a rocket ship straight to heaven in my book.”

Cally’s neck heated up, and she gripped her glass even harder. Obviously, not only did Tate not idolize her anymore, he didn’t think she even deserved compassion. Any desire to touch his hair or shoulder disappeared with a poof of anger and humiliation. “I despise you, Tate Jepson,” she ground out. It was immature and petty, something she might have flung at him when she was twelve and he’d put frogs in her sleeping bag. That day he’d apologized and she’d easily forgiven him. Right now she felt so alone and miserable. She needed him to be her friend like he used to be. Apparently, that wasn’t happening.

He grinned and tilted his glass to her, taking a sip of the cola in it. “Likewise. You look good, Cally. Hopefully I won’t see you for at least another five years.” His eyes were mocking, but there was some deep-seated hurt in them as well.

He sauntered away, and she fumed. Tate was too handsome with that deep red hair, tanned skin and blue eyes, too smart with his fancy Doctor of Podiatric Medicine degree and all the awards she was constantly hearing about him receiving, too wealthy in his impeccable Brioni suit that fit his perfect body like a glove, and entirely too pompous for his own good.

A redhead and a brunette rushed up to him and squealed, each hugging him in turn. Tate looked over the brunette’s mop of hair and met Cally’s gaze. He winked at her and tilted his chin up, acknowledging that he knew she’d been staring. Jerk.